A 50year Old Man Was Spotted Selling Donut Around The Streets In Akwa Ibom -He Is So Brave!!!!

0 Entertainment March 14, 2019
A+ A-
Print Email
Any man who does not want to work, should not be given food says the Holy Bible.

We're really living in a time that laziness should not be embraced.
Hunger and poverty are really over-flooding thousands to grave daily.
READ HERE TOO: See A Cripple Man Who Uses Paint Bucket To Make Water Heater -See Photos and Reactions
An Unidentified Man Who is in his late 50 or Early 60 was spotted hawking Donut around the streets in Uyo, Akwa Ibom State, Nigeria. 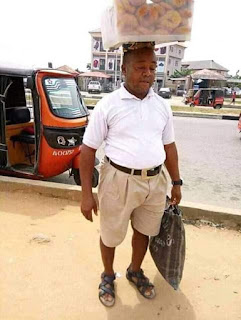 The man is said to be neat in his appearance.
The appearance can even entice you to patronize his products.

Naturally, It would have been embarrassing seeing a Man Who is old enough to fathered 3 to 5 sons hawking around the streets. But He chooses to do this in order to keep food on his table. 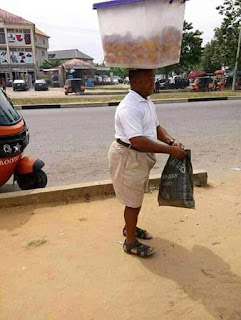 Many people in Territories around commend him for his courage and boldness to overcome shame and sell the DONUT instead of stealing pants as others do or be begging around the streets.

A Lady Praises the Man's Neatness;
"Even if I'm not hungry, I swear I will buy. He's not only cute, he's neat.
Is this not better than stealing pants?" 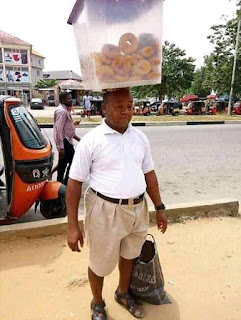 Another Lady says;
"People saying acting... It's a lie oo... I'm trying soo hard to remember where i saw this same man... Either uyo or enugu.. I bought from him also and he was soooo full of happiness..was smiling through out.."

Others Commented;
"I love this man courage oooo. Hunger isn't waiting for any lazy man."

"He always comes to our cds venue in Uyo township stadium to sell.. He speaks very well and he's very neat too"

"Yes of course. There's dignity in labour. We must promote lofty values as against the acquisition of illicit wealth"